During most of 2021, banana exports were below the level reached in 2020. However, this trend changed in October, a month that maintained the best performance compared to the other months of the year and exceeded the figures for the same period 2020 and 2019. 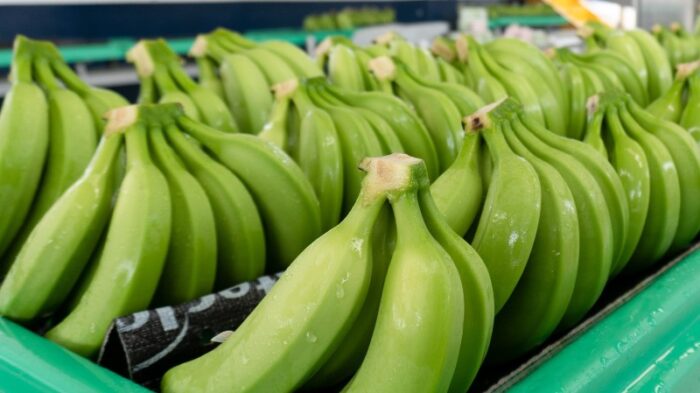 The banana sector expects to improve competitiveness in 2022.

According to data from the Central Bank of Ecuador (BCE), exports of this fruit reached USD 294.2 million, a figure higher than in the last four months. If compared with October 2020, this represents an increase of 18% and 22.5% compared to the same month in 2019.

Data from the Association of Banana Exporters of Ecuador (AEBE) indicate that in the number of boxes there is an increase of 16.2% between October of this year and the same month of 2020.

However, the variation is negative in terms of the volume of sales between January and October of this year compared to 2020. In the first 10 months of the year, exports reached USD 2,892 million, which represented a decrease of 7%, compared to the same months of 2020.

The AEBE noted that there are a number of factors that have caused a significant reduction of export products.

Among them the climate, the tax burden that the sector currently maintains, which is USD 470 million and the investment of the union in private security to protect the fruit from drug trafficking, expenses to prevent and protect the plantations of the Fusarium fungus (FOCR4T)

To this are added exogenous factors, which the sector cannot control, such as: delays in the shipment of product at the beginning of the year, the logistics crisis that caused the increase in freight , the increase in the price of raw materials , variations in supply and demand such as the reduction in the purchase of fruit by the Middle East and Asia, due to the greater growth in the supply of areas near those regions and, purchasing conditions, especially in the European continent, a demanding market for certifications and others procedures.

For the new year, the sector is also concerned about the USD 25 salary increase, which they believe will reduce their competitiveness.

Juan José Pons, coordinator of the Ecuadorian Banana and Banana Cluster, pointed out that for next year it is necessary to work on the competitiveness of the sector and strengthen commercial relations in markets where they have lost their presence due to the lack of international treaties. “The implementation of alliances can become the main route of recovery and growth of the banana industry,” he said.

For José Antonio Hidalgo, executive director of AEBE, this problem can be compensated by the Government through measures such as the ‘drawback’ (regime through which exporting companies can obtain a refund of import taxes paid); the reduction of the foreign currency outflow tax (ISD) and the reduction of the tariff to 170 items.

Performance of the trade balance

Between January and October 2021, the total trade balance registered a favorable balance of USD 2 332 million, resulting from a trade surplus of USD 3 828 million in the oil balance and a deficit of USD 1,496 million in the non-oil balance, according to the ECB.

The first 10 export products, composed mainly of products from the food supply such as shrimp, bananas, canned fish, cocoa and others, added more than USD 10.9 billion in sales abroad.

The United States, Asia and Europe are the markets where the majority of consumers of Ecuadorian exports are found.

According to the data, the products that grew the most in imported value are cast iron and steel, vehicles and parts, plastic and manufacturing, which increased by more than 50%, compared to 2020.