In the 10 months that the dialogue table with Odebrecht was active, the Ecuadorian authorities and the construction company held two meetings : in July and August 2019. The idea was to set an amount of compensation for the bribery plot . 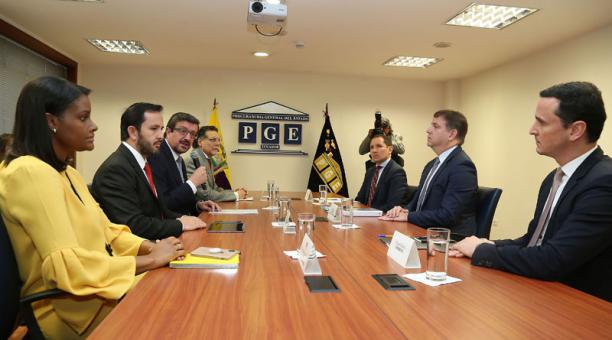 Was that accomplished? The State and the Brazilian company only advanced to the methodological framework. In other words, they agreed to determine the amount of the repair based on two criteria : material damages (calculated in principle at USD 35 million, due to bribes ) and non-pecuniary damages (these values ​​- generated by loss of trust, credibility and respect for public institutions – were never computed).

In Peru , the firm has already agreed to reparations for approximately USD 200 million. In Panama , on the other hand, you must pay USD 220 million. Unlike these nations , in Ecuador the dialogues concluded last week. The State Attorney General , Íñigo Salvador , accused the company managers of “lack of seriousness ” and of putting “coercive” requirements .

According to him, the company would have conditioned the compensation to the construction company becoming a state contractor and, furthermore, it had hinted at the end of its effective cooperation agreement with the Prosecutor’s Office if its requirements were not accepted. The Brazilian firm denied this version and maintained that it will collaborate with the authorities .

For the lawyer Édgar Vinueza, an expert in civil law , there is no legal framework in the country that allows for the comprehensive reparation of a company that has not been prosecuted. “Without a judgment against Odebrecht or its executives , we can only hope for good will, as we do not have a regulation that requires the payment of reparations for companies that have committed transnational acts of corruption .”

In the case of Peru, its judicial authorities established in 2018 a Guarantee Trust to ensure the disbursement of the repair, in 15 years. The idea is to release USD 135 from the Trust for the company, so that it can pay debts and continue its operation.

This Trust is nourished by Odebrecht’s income from public and private contracts in that country, as well as from the sale of its assets.

On the other hand, in Ecuador Odebrecht has no assets . This information was communicated to the Attorney.

The only thing that it owns is USD 115 million withheld by the State, for payments of works that were in execution when the bribery plot exploded , in 2017.

César Montúfar, a political activist, questioned the Attorney General’s work, since in the 10 months of talks the company has not canceled other pending debts. “In addition to stealing and suing the State, he continues to mock Ecuador.”

With the Internal Revenue Service, Odebrecht has obligations for USD 25 million related to tax payments. In the Comptroller’s Office there are administrative and civil glosses equivalent to USD 145.5 million.

According to the last report of the control entity, of July 2019, the Brazilian firm had been observed 38 times and criminal indications were found in the construction of the San Francisco hydroelectric plant, in the Irrigation Transfer Daule-Vinces project, in the Refinery of the Pacific and in the La Esperanza aqueduct.

The same happened in the Pascuales-Cuenca pipeline, in the Manduriacu hydroelectric plant and in the construction of the Gringo Pepe bridge. Everything is under tax investigation.

Odebrecht, for his part, assured that the door is not closed. On Monday, May 25, 2020, its managers indicated that they are willing to talk with the national authorities and agree on an amount of compensation . “In the event that the Ecuadorian State decides to resume the dialogues, the company will always be at its disposal.”

Those who earn 5,000 dollars a month and companies that have not seen their income affected must advance payment of taxes, announced Lenín Moreno