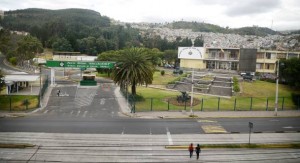 The insufficient economic resources  have led the Ecuadorian government to decide a cut of at least $ 334 million of the construction of the platforms Governmental Policy and that of Strategic Sectors, among these the new offices of President Rafael Correa, which will have to wait.

The political platform, which was to bring together in the sector of the Military Base Epiclachima (south of Quito) Executive institutions such as the presidency, vice presidency, Ministry of Interior and secretariats, will be built “when there are better economics conditions,” Correa said in his weekly address of February 21. This requires an investment of $ 219 million.

However, Correa informed that the construction of three platforms for social, financial and production sectors will start. The first two in Quito and the third in Guayaquil. The total investment is $ 263.5 million, according to data of the presidency and the Inmobiliar company.

According to Correa, these are made because they have funding from the Inter-American Development Bank (IDB) and the European Investment Bank (EIB). These credits are “tied” (to projects), he said.

The construction would begin in two or three months and will end in August 2016.