Oil did not infect private sales 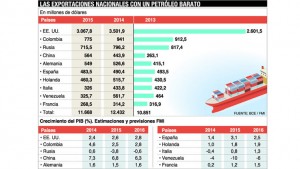 In the two years of the cheapest oil in the last decade, trading partners have allowed the country to export more than in the previous two years (2012 and 2013) when exporting oil was like having money trees.

The figures of the Central Bank of Ecuador also show that trading partners of the country have contributed to the national economy despite the weakening of their own performance. Of the five major export destinations, only the first and last have grown in 2015. And they have done it gently.

Tax law will include analysis of other issues