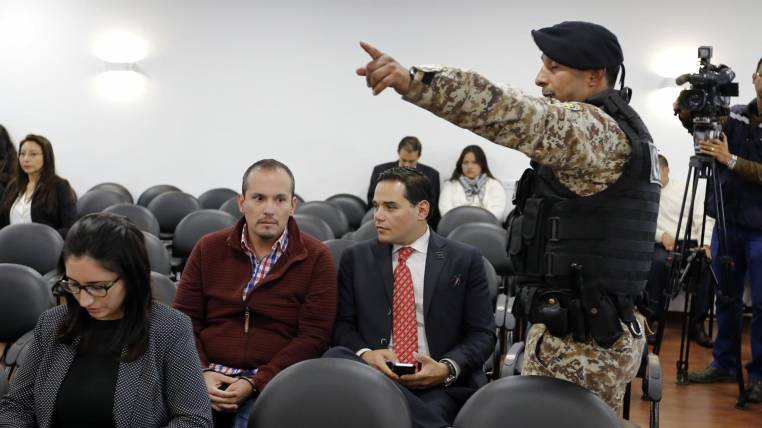 Two countries managed to unravel the corruption scheme in Petroecuador attributed to Álex Bravo, ex-manager of the state company.

The edges also came to the United States, as outlined by EXPRESO, in a publication of May 19, which realizes that in that country is also pursued the payment of bribes. In 2017, a former Petroecuador official was arrested for money laundering.

Although the origin of the crimes (embezzlement, bribery, illicit enrichment, money laundering, illicit association, organized crime) was Ecuador, it was also perfected in Panama and the United States.

Bravo was not very careful when it came to involving his relatives. Although in most of the five paper companies constituted in Panama he appeared as legal representative and shareholder also included his relatives. They, according to the investigations, would have benefited from millionaire contracts signed by the state while Bravo was an official.

He located Jelice Herrera, his wife, Xenia Panchano his mother and Gorky Rueda his stepfather. The justice of Ecuador exonerated the last two.

The Public Prosecutor of Panama broke down the transfers made by a score of companies to the offshore accounts of Bravo and disbursements to accounts of family members and ex-employees of the state company, such as Carlos Pareja Yannuzzelli who was also Minister of Hydrocarbons.

Neither the individuals nor the legal entities involved in the transactions justified the funds received and sent, says the fiscal opinion that calls for the trial of Bravo, Pareja and 21 other people in Panama. Most are Ecuadorian but there are also Panamanians, Venezuelans and a Korean, as reported in this Journal yesterday.

They helped Bravo in the money laundering configuration of which he is accused. Among the transfers that most caught the attention of the authorities are those made by Arkdale to Gevabra in the All Bank for more than $ 800,000 between September and December 2015.

The beneficiary of the company Arkdale International Investment is Jaime Baquerizo, says the fiscal opinion.

In the request to open Gevabra’s account in the All Bank, it was justified that it was to “receive bill payments for the consulting and oil services offered to foreign companies.”

But, in the general information of the client as a legal entity it was indicated that savings were wage products.

One of the companies that most collaborated with Bravo in Panama was the All Bank official, Julie Palacios, sentenced to 60 months in prison for money laundering.

She wrote a visit report in which the Gevabra company “was requested by Mr. Álex to be created in the Panamanian Jurisdiction and they decided that it would be used by Mrs. Bravo for her savings. Ms. will save the product of her salary / bonuses that she gets from her work. ”

Palacios also helped in the opening of accounts for the firms Esdoar, Ivisahe, Radoes and was authorized to represent them.

From Panama, Bravo transferred money to his accounts in the United States, Carlos Andrés Pareja, Robert Hooper, Yolanda Pareja, Kilkenny, Escart and Arturo Escobar, among others, review the tax resolution.

The network of relationships that allowed us to configure money laundering involves all those processed in the constitution of signatures, payments and receipt of transfers that details the request for judgment.

In the indictment of Panama, there is documentation from Escobar, DellaTogna, Icaza & Jurado that indicates that, following the instructions of Daniel Zamudio, they provided legal services to Bravo and his wife.

The firm incorporated the Girbra companies that had Álex Bravo as its final beneficiary. Pidmg with Paquita de Mora as beneficiary, Escart with Alfredo Escobar and RGH Investment with final beneficiary to Robert Hooper.

In April of 2017 there was a search of the residence of Julie Palacios, an All Bank official who helped Bravo in the opening of accounts. Deeds, powers, meetings minutes were confiscated, among other things. (I)