One of the new CPCCS members has an arrest warrant

Jaime Chugchilán, who must replace Francisco Bravo, has been wanted since July 2022. There is a process against him for alleged fraud. 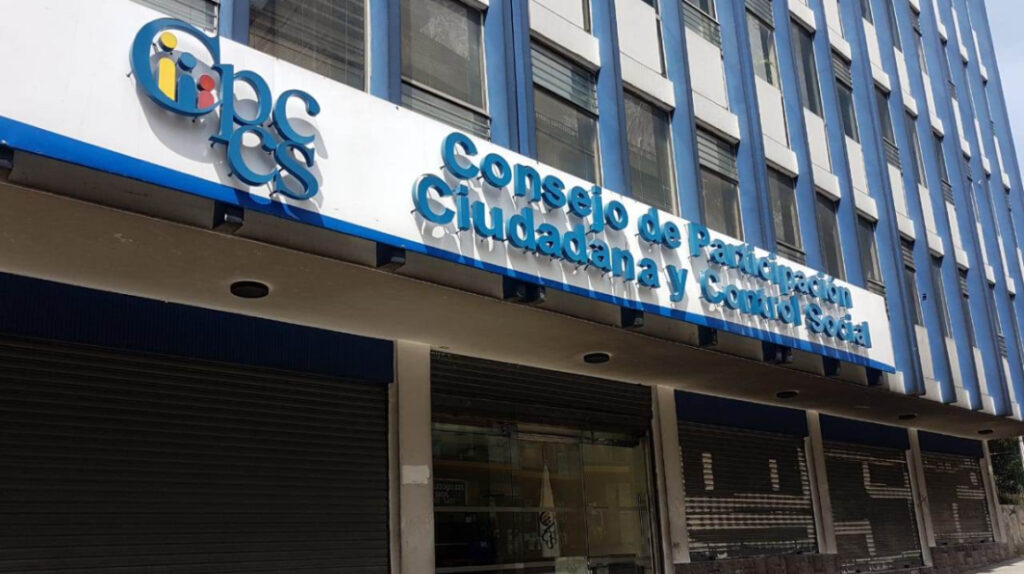 Facade of the Citizen Participation Council building, in Quito. The CNE has received 140 requests for a code to apply to the body.

Three months after the new members of the Citizen Participation Council (Cpccs) are elected, the body undergoes the third variation in its conformation in the period 2019-2023.

For this period, for the first time, the members of Citizen Participation were elected through popular vote. However, of the seven who were elected in 2019, only Sofía Almeida remains in office until November 2022.

Previously, Rosa Chalá, Victoria Desintonio, Walter Gómez, José Carlos Tuárez and Christian Cruz had been dismissed. In total there were nine dismissals of CPCCS directors in this period.

Those who would arrive

As it is an election by popular vote, the positions are automatically assumed by those who follow on the list with the most votes. This is how successions have been carried out in previous dismissals.

Now, according to the list managed by the National Electoral Council (CNE), the Assembly must appoint the four new councilors:

Even before possession, there is already a controversy regarding one of the virtual advisors. This is Jaime Chugchilán , who should assume the position left by Francisco Bravo as representative of the peoples and nationalities.

According to the registry of the Judicial Function, Chugchilán has an open process for alleged fraud, since 2019. Initially, alternative measures were issued against the possible member, such as a ban on leaving the country and periodic presentation.

He was even called to trial and the hearing was scheduled for September 2022. However, Chugchilán failed to comply with the precautionary measures.

For this reason, in July 2022, the Prosecutor’s Office requested a review of the measures and the judge in the case issued a preventive detention order. In other words, since that time he has been a fugitive and it has not been possible to start a trial against him.

According to the Prosecutor’s theory, in 2019, Chugchilán tried to sell some stalls in the Quito Wholesale Market that supposedly did not belong to him. For this, he arranged for 14 people to obtain a loan of USD 10,000 in a Savings and Credit Cooperative.

That financial entity transferred those funds directly to Chugchilán. However, he never handed over the deeds or formalized the sale of the stalls to the alleged victims.

The new members will join the three who were not dismissed: David Rosero, Sofía Almeida and Juan Javier Dávalos.

This in turn will mean a rearrangement in the internal forces of the CPCCS. The four dismissed, with Ulloa at the head, operated as a majority and their positions had been indicated as aligned with the policies of the Executive.

While the minority of Rosero, Almeida and Dávalos would be aligned with the new majority that is operating in the Assembly, with correísmo and the Social Christian Party (PSC) at the head.

It is yet to be defined what position the four new members will assume, as well as the designation of the new internal authorities of the Council. Rosero, for example, would be lobbying to be the new president.

The reorganization of the CPCCS occurs in the midst of eight processes for the designation of authorities that are underway.

Of these processes, there are three more advanced: the appointments in the Judiciary, the Comptroller ‘s Office and the Public Defender ‘s Office.

The appointment of the new Controller is the turning point in this institution. The dismissed members were accused of irregularities in the approval of the regulations.

And although the call to register candidacies has already been opened, in the Cpccs, the remaining members are already talking about a total review of the procedure.

However, all this happens against time. In February, the new members of this body will be elected and the whole panorama could change.

In addition, in this electoral process a popular consultation promoted by the Executive could be included, in which there are questions that focus on removing the power to designate authorities from the CPCCS.

This note was originally published at 05:27 on November 21, 2022. But it was updated at 11:42 of the same day with the details of the arrest warrant against Jaime Chugchilán .

Gustavo Manrique: Ecuador is a world benchmark in the implementation of a sustainable development model based on ecological transition