Only 7 of 22 provincial territorial agreements have been reached 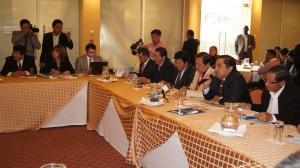 At national level there are 22 of these disputes, which shall be resolved until April 2015, according to the Law on territorial borders establishment.

Furthermore, of Loja and Azuay, Chimborazo and Bolivar, and Cotopaxi and Tungurahua, are registered in the Conali.

Muñoz said that the consortium defined an internal deadline so that the provinces reach a solution. It will be until next February 15, as agreed in a meeting with the governors last December.