Opposition Draft laws are not considered in the Assembly 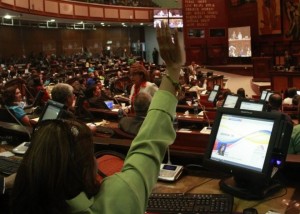 Government Block, Alianza PAIS (AP,) dismissed to include several projects proposed by the opposition to be processed and approved in the 2014 legislative period.

Yesterday, President Rafael Correa accepted a list of 23 laws divided by trimesters drawn up by the commission chairpersons, block coordinators and members of the Legislative Administration (CAL).

Among the initiatives of the opposition that were not considered, figure the draft of Reformatory Law to the Law of Elder by Henry Cucalón (PSC-MG), the Urban Entrepreneurs of Mae Montaño (CREO) or the law reformatory to Disabilities Law of Maria Cristina Kronfle (PSC-MG).

Regarding non-hosted projects, the AP block coordinator, Fausto Cayambe, said that the agenda is not closed and the projects submitted by other political groups could be collected.