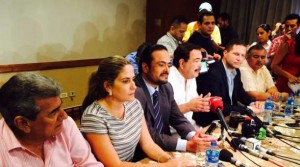 Mayors of Quito Mauricio Rodas, Mayor of Guayaquil Jaime Nebot, and the prefect of Azuay, Paul Carrasco, gathered in the main port. On this occasion, they discussed the events developed in recent days within the framework of the “unity” convened on  February 23rd.

They gave a press conference in which they said that in the last meeting held they analyzed the demands of the population to subsequently channel them in each territory they administer.

In the same context, Mayor Rodas reiterated he plans to convene a demonstration in Quito if President Correa does not rectify the policies demanded by some social sectors. The alleged march would happen after the visit of Pope Francis to Ecuador, to which Nebot said he would respect the autonomy of the capital and the ideal is not to politicize the demonstration.

The authorities mentioned that the meetings are conducted every 15 days, and that they will continue.

OAS makes a call for dialogue in Ecuador