Organization that raised injunctions prepares its own query 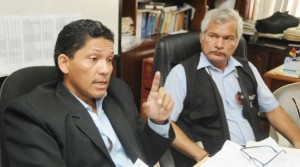 The organization “Vigilantes de la Justicia” (Rangers of Justice by its English name) indicated that in about 15 days they would propose a referendum on the indefinite reelection, a constitutional amendment being debated in the Assembly.
Rafael Navarrete, President of the oversight ensures that in his approach they will follow the procedure established by the Constitution.
“In Section 104, the Constitution determines that a referendum must take place under the ruling of the Constitutional Court, then go to the National Electoral Council and ask for the forms,” said Navarrete.
OnNovember 19, the groupfiledrequests for precautionary measuresfor theCNE todo not deliverthe forms toCommitmentEcuadorandPatriotic Society(SP).”We are notagainstGuillermoLassoor againstGilmarGutiérrez,the injunctionisagainst theCNE,”Navarretesaid.

Navarrete said that the oversight is unrelated to any political group, although in the Facebook profile of Luis Pino, a member who signed the request for precautionary measures, it is indicated that he would be a leader of Alianza País. Pino denied this claim laughing and saying: “If I had that position I would charge for that.”

Legal review of agreements between Ecuador and the EU continues