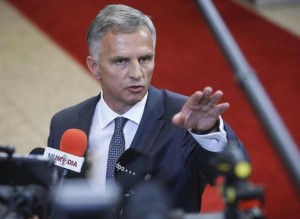 President of the Organization for Security and Cooperation in Europe (OSCE) and head of Swiss diplomacy, Didier Burkhalter

The acting President of the Organization for Security and Cooperation in Europe (OSCE) and Head of Swiss Diplomacy, Didier Burkhalter, today explained to the Foreign Affairs Council of the European Union (EU) its roadmap to end the crisis in Ukraine and lay the foundations of peace.

The document includes four parts: nonviolence, disarmament, national dialogue and presidential elections scheduled for next May 25, he said.

The official mentioned that the roadmap responds to the `urgency´ of the situation, since it has not put an end to the heightened tangible tensions following April 17 or a consensus on how to implement that agreement.

Likewise, he assured before the press that to start up a national dialogue is `very important to have support from the four of Geneva´: Russia, Ukraine, USA and EU.

Burkhalter, invited by the Europeans ministers to discuss the situation Ukraine lives, gave details last Wednesday of the already distributed plan to the parts that met in Geneva on April 17 to seek a negotiated solution to the crisis.