Pachakutik will submit to the CC an initiative for referendum 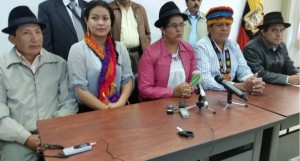 The leadership of the Pachakutik movement intends to approach the Constitutional Court (CC) to submit a list of questions for a referendum. This will be on March 19, before the march organized by social organizations, at 16:00.

The legislator of this group, Magali Orellana, confirmed the decision to promote a consultation process to the Ecuadorian people, based on the topics discussed in their provincial assemblies.

This would be the fourth initiative for a popular consultation that reaches the CC. Some groups do not rule out a possible union. Gilmar Gutiérrez (PSP), acknowledged that talks with Pachakutik to join efforts around the query, “as a viable way to fight against government policy,” he said.

30 more loans from the Cofiec case remain under investigation