Páez and Villavicencio testified in Quito 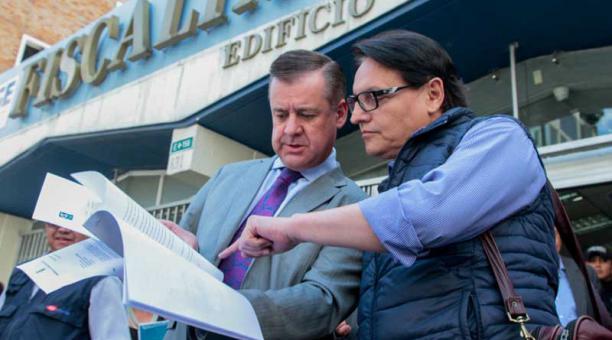 Both were summoned to testify about a reserved investigation against former Vice President Jorge Glas and his uncle Ricardo Rivera. Páez pointed out that they were summoned after three years of reporting alleged irregular transfers from two offshore companies to Rivera and José Alvear, a businessman who has already died.

According to the ex-legislator, Glory International Industry Company Limited, based in Hong Kong; and Bielbasilea Corp., domiciled in Panama, among others, sent money to Rivera and Alvear for a final amount of USD 22.8 million. After the appearance, Páez warned that he presented more than 200 documents in the Prosecutor’s Office of Pichincha, which would reveal alleged acts of corruption that would involve former Vice President Glas. “Three years ago I told President (Rafael) Correa in a letter that there were these transfers. I told him the banks, account numbers, beneficiaries, the amounts, something like USD 23 million, “Paéz told the Prosecutor’s Office.

Villavicencio, on the other hand, maintained that “nobody took into account” the complaint that was revealed in January 2015. The name of Glory International Industry Company Limited already transcended in the trial for conspiracy, in which he was sentenced to six years in prison. , Rivera and three other suspects. In that trial, the Prosecutor’s Office warned that Odebrecht made possibly illicit payments to Rivera through Glory. However, Rivera denied it and said he has no relationship with that offshore.

The current investigation against Glas is reserved, so the documents that Páez and Villavicencio submitted are not public.

Court is not out of time to issue a ruling

Meanwhile, on January 4, Gustavo Jalkh, president of the Council of the Judiciary, said that the Court of the National Court of Justice that sentenced Glas, within the Odebrecht case, has not delayed the notification of the written judgment. “The sentence in writing has a time in which it can be delivered, but also remember that the law (the Code of Processes) establishes that for each body, the Court has one more day to issue its sentence.

The Court is absolutely in its legal time to issue its written sentence, “he said. For the head of the Judiciary, the important thing is that the judges already handed down their sentence orally, on December 13, and established the guilt of Glas. On Monday, Eduardo Franco Loor, lawyer of the former vice president, denounced the delay of the Court at the time of issuing the written decision, and said that this document is essential to appeal the sentence of six years. On Thursday, the magistrates warned that they will notify the ruling in writing ‘opportunely’. (I)