Patients and doctors ask Moreno to rectify statements about cancer; the President pronounced himself 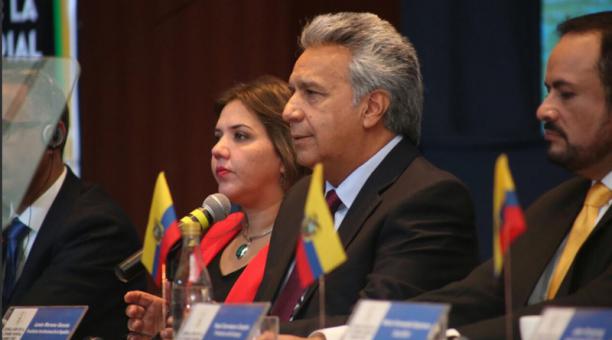 Guilds of doctors, patients and organizations fighting against cancer reacted to the statements given by the president, Lenin Moreno, about this disease.

He did it in the III World Summit of Regions on Food Security and Food Sovereignty Zero Hunger, which was held in Cuenca, last Friday, April 27. The President announced the night of this Thursday, May 3, 2018. Gustavo Dávila, president of the Youth Against Cancer Foundation, asked the President to receive a delegation of cancer patients, so they can explain the reality of their illness, the treatments they need and the efforts they make to fight for their lives.

“With all due respect, we tell the President that the specialists should talk about cancer,” he insisted. In his speech, Moreno said that in the world there are more cancer specialists than patients.

And he also issued statements against the doctors who treat this disease. “When you are told that you have cancer, it is possible that the only one who is happy is the doctor, forgive me, not everyone, but on more than one occasion, the word cancer means a person almost a catastrophe.”

The Head of State also presented an anecdote with a group of cancer patients, which caused discomfort in social networks. “When I saw them, I told them, why are they fighting cancer? and they told me that because he is the enemy, he is killing us. I answered that it is not true, cancer is not your enemy, cancer is a friend that warns you: go idiot, do not keep having the same toxic habits, the same toxic thoughts, the same toxic emotions, the same toxic feelings because you will die.

Why don’t we see it as a friend? the friend who warns you, if you follow the same path, if you keep driving in the same way, you will definitely die. “At the discretion of Dávila, it is not correct that President Moreno says that cancer is cured with a balance of the five elements and leaving aside toxic thoughts. “We consider it of vital importance that the Chief Executive rectifys that.”

The owner of the foundation, which serves 1 207 cancer patients, gave some information about the specialist professionals in Ecuador. “There are less than 10 pediatric oncologists and less than 10 psychologists who are experts in cancer. How can you say that there are more specialists than patients? “He questioned.

Nelly Valbuena, cancer patient and representative of the Breast Cancer League, believes that the Head of State must assume the error in which he incurred because his statements could affect patients and their families.

He also questioned the appointment of doctors, whom they consider their colleagues, since they are with them a large part of their time. “It’s a very unfair statement,” he said. Valbuena also insists that Moreno should get closer to the reality of patients, to have a clearer vision of their day to day.

He added that with his speech, the President pretends to give the idea that the entire responsibility for the recovery of cancer patients falls on their own will, leaving behind toxic memories and changing their lifestyle. “Let it be said by a healer or healer, go and pass. But what the President says, the first authority of a Nation, causes stupor. ”

Nelly invited the Head of State to visit the Oncology Unit of the Carlos Andrade Marín Hospital (HCAM) or Solca Hospital and see how many people expect to be seen on a daily basis. “He would be shocked to see how our patient reality is. I refuse to think that there, seeing us, advises us to leave toxic thoughts aside “.

The Medical Association of Pichincha, in its Facebook profile, expressed its discomfort at the words of the Head of State. “We categorically reject the statements of the President, which affects the dignity of Physicians and we demand the respective clarifications urgently. We will not allow the honor and the noble mission of the Ecuadorian Doctor to be doubted about dignity.”

In the Twitter profile of the Ecuadorian Medical Federation, the doctors ask Moreno to get better advice on health issues before speaking in public

The president, Lenin Moreno, ruled after Thursday night on the subject. On his Twitter account, the President offered an apology and wrote: “I have always said that criticism allows us to improve, I apologize for my unfortunate statements, I have a deep respect and affection for the Ecuadorian medical community.” (I)