Patiño indicates that the U.S. pledged to speed up extradition procedures 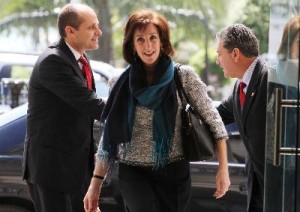 After the meeting with  the Assistant Secretary of State for Western Hemisphere Affairs, Roberta Jacobson, Foreign Minister Ricardo Patino said that the US representative pledged her government’s help to expedite the extradition of the Isaias brothers; the former President Jamil Mahuad; the former General of Police, Edgar Vaca, and Pedro Delgado, former President of the Central Bank, claimed by the Ecuadorian courts.

The Interior Minister, José Serrano, expressed his concern at the appointment of the “red notices” (arrest warrants) that, on these cases, the Interpol has not issued. Serrano would have received total acceptance by Jacobson, who offered to have an answer within the next few weeks.

In addition, it was addressed the issue of the bombing of the FARC camp in Angostura, on March 1, 2008, and the alleged involvement of the CIA in the assassination of former guerrilla leader Raul Reyes, in national territory.

Jacobson said that the U.S. has “all the willingness to cooperate in areas of mutual interests (…) We had a very successful meeting.”