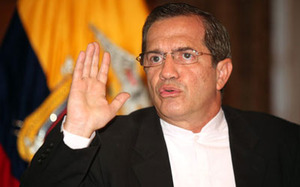 Ricardo Patino, Minister of Foreign Affairs, commented on the statements claims made by the U.S. Ambassador in Ecuador, Adam Namm, who explained that if Ecuador decides to cancel the bilateral investment treaty signed on August 27, 1993, the effect would be negative because U.S. companies would fear to invest in the country.

The ambassador’s reaction came after the regime leader, Rafael Correa, announced an audit for over 26 international agreements for considering them harmful to the Ecuadorian regime.

According to Patino, “in many countries of the world that do not have bilateral agreements, investments arrive without problem” and cataloged these treaties as “unpatriotic and damaging to our country because unfortunately they were signed in the neoliberal era.”

For Patino the importance of private investment, is that the laws are transparent and in Ecuador there is a Production Code and the Constitution that have fairly transparent rules to attract private investment, he said. Therefore insisted that one cannot “put all the conditions in favor of capital and against the interests of citizens.”