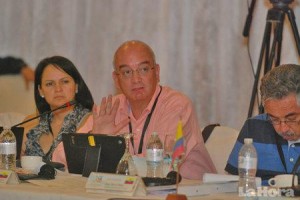 Patricio Baca Mancheno is now in charge of the Contentious Electoral Tribunal (TCE), after that Catalina Castro Llerena  resigned for personal matters last Thursday, according to a letter. That same day, there was a plenary session to take a resolution.

The Vice Presidency is occupied by Guillermo González Orquera. The vacancy was filled by the Substitute Judge Angelina Veloz Bonilla, who is also Director of the Electoral Promotion in the National Electoral Council (CNE).

Castro was in the Presidency since the appointment of the Court, in May 2012. Baca is a Doctor in Jurisprudence and an university professor.