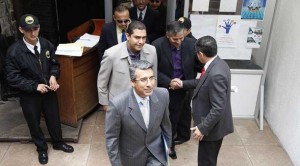 The President of the Patriotic Society Party (PSP), Gilmar Gutiérrez, came on November 25 to the National Electoral Council (CNE for its Spanish acronym) to require a response about his referendum initiative.

The questions the PSP seeks to raise are to prevent indefinite reelection and the use of public funds in campaign. In addition, to modify the conformation of the CNE and also include representatives of the most voted political organizations.

Juan Pablo Pozo, member of the organization, responded to the petition of the PSP: that the electoral authority must follow the technical and legal process and there will just be a pronouncement when the plenary of the body knows the legal report on the proposal. This could be, according to his calculations, until next week.

Mexico: Parents of 43 missing students denounced ineptitude of the government