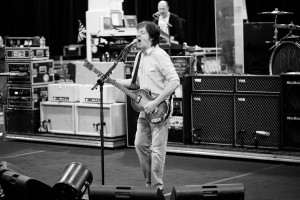 Two weeks are left for the concert of Sir Paul McCartney in the city of Quito, therefore, according to the communication direction of the show, the artist is rehearsing in the city of Los Angeles to begin his tour Out There!, Which will reach several countries in Latin America. Three cargo planes with equipment to set the stage come next Monday, while the security team of the artist came to the country last week to finalize details of his personal transfer.

Among the demands of the British artist in terms of hosting, he requests that the room has an open-air space, since McCartney is a well known environmentalist. It is expected his arrival with his wife on Saturday 26, April, and the day after the concert he leaves the country without even confirming his visit to the Galapagos Islands.