Paul the Octopus is Remembered 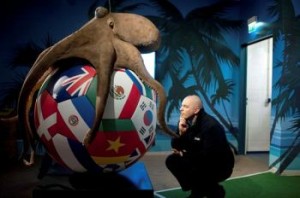 The octopus Paul became famous for accurately predicting the results of the World Cup matches. Now Paul has his own statue on the aquarium Sea Life in Oberhausen. This plastic replica of two meters high presents Paul grabbing a soccer ball with its eight tentacles.

Tanja Munzig, spokesman of the aquarium, informed that Paul’s ashes are in a gold covered urn inside the ball. Paul passed away three months ago, and Munzig revealed that fans from the whole world asked for a monument.

Paul predicted correctly the results of seven games of Germany in the World Cup; he even predicted that Spain would win over Holland. The octopus made his predictions after opening a lid of two transparent boxes; each one had a mollusk and a team flag.

Anne Hathaway Will Be the New Catwoman