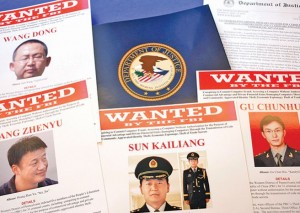 Part of the press material which offered the Justice Department of the United States. Photo: AP

The U.S. Ambassador to China Max Baucus met with Zeguang Zheng, deputy Foreign Minister of China, shortly after the United States made ​​the accusation of espionage in U.S. companies of metals, nuclear and solar energy.

Zheng protested against the United States actions, saying that the prosecution had severely damaged relations between the two countries, indicated the Chancellery in a statement.

China, for its part, accused the U.S. of acting with “arbitrariness and hypocrisy” because, according to Peking, Washington has carried out “activities on a large scale of cybernetic data theft and surveillance.”