Photo of the Correista Regime is now considered an historical meme 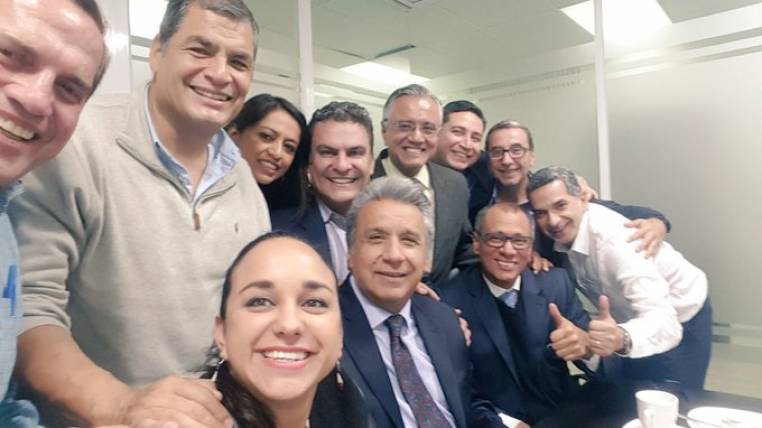 The date: June 12, 2017. They were happy days of unity and victory. Lenin Moreno had just assumed the Presidency of the Republic and the correísmo, to which he still belonged (perhaps already a little reluctantly), was on the crest of the wave. Gabriela Rivadeneira took the ‘selfie’ and uploaded it to her Twitter account with a message of triumphant rhetoric: “Together we strengthen the unity, loyalty and historical coherence of the political project. Long live the Citizen Revolution! @Lenin @MashiRafael ”. The members of the staff of the government party appear exultant and dead of laughter, preparing for four more years of power, four more years of absolute control of the institutions, four more years of public contracts with the modality of special regime and turn business specific

As impunity had been the norm of the previous ten years, those present in the photo were confident that no judicial investigation could reach them, not so high. The fact is that none of them – with the likely exception of President Moreno, who is clearly the only one who smiles out of commitment – seems to notice that everything is about to change. Only nine days earlier, on June 3, in a dozen simultaneous raids in Guayaquil, Daule, Quito and Latacunga, the Police and the Prosecutor’s Office had achieved the first five arrests of the Odebrecht case. Among those arrested was Ricardo Rivera, the uncle of Vice President Jorge Glas who lifts his thumb calmly and satisfied, sitting to the right of the head of state. They never imagined it, but it was the beginning of the end. The “unity, loyalty and historical coherence of the political project” that Gabriela Rivadeneira speaks about is about to go through a pipe. Soon the match will be divided; soon the president will break up with those who put him there; soon correísmo will lose the parliamentary majority and the control of justice. Anyway, soon the smiles on their faces will be erased and this photo would become what it is today: meat of meme.

“Give Lenin, one more chrome and complete the album.” With this chascarrillo and the faces of those who came out of circulation crossed out with an X, the photo circulated again these days through social networks. And yes: only one survives. Of the ten characters surrounding the president, two are in jail (Jorge Glas and Paola Pabón); one has precautionary measures, has an electronic shackle and is required to appear regularly before the judges (Alexis Mera); four are fugitives from justice (Rafael Correa, Ricardo Patiño and the brothers Vinicio and Fernando Alvarado); one set foot in dusty and took refuge in the Mexican Embassy before the waters become cloudy (Gabriela Rivadeneira, the happy photographer); one left the Government after having screwed up as much as possible (Eduardo Mangas) and one, only one, continues as fierce in the exercise of his position as Assemblyman of the Republic: the ubiquitous, unpredictable, dark and stealthy José Serrano .

It is unheard of. José Serrano is one of those who had to fall first. Exactly in March 2018, when it was discovered that, being president of the National Assembly, he had conspired with the ex-controller Carlos Pólit (the guardian angel of the photographed, already at that time a fugitive from justice) with the purpose of knocking down nothing less than to the attorney general of the Nation, Carlos Baca Mancheno (another little angel). The recording of a telephone conversation between Serrano and Polit (made public by the prosecutor) did not leave a loophole for doubt: yes, they conspired. “We have to lower him, we have no more,” was the exact phrase of Serrano. The scandal was capitalized and reached the Plenary of the Assembly, which called both (Serrano and Baca) to explain. That session will go down in history as the most embarrassing mutual exchange of mud and garbage that is remembered.

Both characters descended to the sewers and stayed there. In response, the Plenary of the Assembly decided to sanction the two: Baca Mancheno opened a political trial that concluded with his censorship and dismissal; Serrano, on the other hand, lost the presidency.

Things of the Assembly: there were assembly members dismissed by minor scams; José Serrano conspired against the prosecutor and retained his seat. Nobody messes with him. Each bishop’s death goes, he takes possession of his seat, to the center in the front row, and, rather than attending the sessions, he performs office duties, receives one and another assemblyman (it would seem that half the world has issues to deal with him ) makes calls, gives instructions to his people and refrains from intervening in the debates. Fifth columnist of the ruling party, with which he never broke in theory, he manages a miniblock of seven or eight assembly members, all of them official in the papers but who, however, systematically vote for the theses of correismo. Official or correista? The two things or none: serranista, in short. During the week of political crisis and street violence that the Republic experienced on the occasion of the attempted coup d’etat perpetrated by the correistas, he was one of the animators (according to witnesses) of the reserved meetings held by assemblies of different blocks in order to discuss (how appropriate) the mechanisms of presidential succession.

The other characters in the photo have a lot to learn from him. In particular the coup plotters. Because the characters fallen from the photo (except Mangas) are divided into two groups: the coup and the corrupt. And the former have moved so awkwardly and flabbergasted, they have been so loud and wild that they ended up falling like rabbits. Ricardo Patiño, who lets himself be filmed while instructing his hosts: “It is necessary to go on the offensive, from passive resistance to combat, we have to take public institutions.” And then he goes to the intelligence personnel that he assumes is infiltrated in the place and tells them: “Tell your bosses that we are not afraid of you.” Today he has an arrest warrant and complains. What did i expect? Paola Pabón, who blocks the capital with trucks that carry his logo and also complains. Gabriela Rivadeneira, who gives herself away, fleeing before anyone looks for her. All to Mexico, the new Latin American destination of the self-exile Cheveranga since toilet paper ended in Venezuela.

And that ended “the unity, loyalty and historical coherence of the political project.” All prisoners or fleeing with the tail between the legs. The king, in Belgium, working for Russian television; the supposed communication geniuses, in Venezuela, in the shadow of a tyrant; the lawyer, with an electronic shackle attached to his ankle … It is significant that the crime for which Jorge Glas was sentenced to prison is precisely “association to commit crimes.” Because if Gabriela Rivadeneira tweeted this ‘selfie’ in the hope of bequeathing an image for the story, she was not mistaken: this photo will go down in history. Not like the group portrait of a team of united, loyal and coherent revolutionaries. This photo will go down in history with the title it already has: “Association to commit crime.”

They are not all who are

In Gabriela Rivadeneira’s selfie there are some notable characters of correism who also fell out of favor. Among the main ones: the ineffable Carlos Pólit, the comptroller qualified with 100 points out of 100; Galo Chiriboga, the friendly prosecutor; Virgilio Hernández, the leader of the party haranguing the masses to overthrow the government.