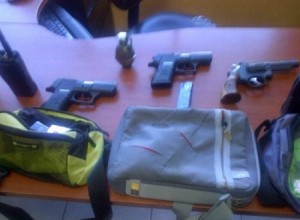 Members of the Judicial Police (PJ) arrested Colombian citizens J.J.G.J, C.M.P, Y.Y.B.O and J.Y.C.C, alleged members of the 48th Front of the FARC, according to the Prosecution.

The arrest was made yesterday when PJ personnel and the Special Operations Group (GOE for its Spanish acronym) performed a routine patrol in Colombia Avenue, in Lago Agrio, Sucumbios Province.

In their power were found weapons, ammunition, grenades, cartridges, cell phones, laptops, balaclava, backpacks, among others,

The Court hearing in the Penal Guarantees Court of Sucumbios would be held today.