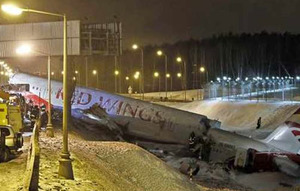 On Sunday one Boenig 737-500 crashed at the airport in the city of Kazan, capital of the Republic of Tatarstan, the accident left 50 dead people.

According to preliminary data, the 44 passengers and 6 crew of Tatarstan company plane died instantly as the aircraft exploded and broke into several parts after the impact of the fuel tank to the ground.

“Judging from the wreckage, hardly anyone has been able to survive,” said a spokesman for transport services to the RIA – Novosti news agency.

Sources of the transportation services reported that the aircraft lost altitude to on its way back to the airport to return to earth and try to take a direct hit with its nose to the ground.

The Boening 737, one of the most widely used aircraft in civil aviation took off an hour before the Domodedovo International Airport (Moscow), burned to the ground collision, a fire that was extinguished by firefighters.

Among the names of the victims, is the son of the president of Tatarstan and the regional director of the Federal Security Service (FSG , formerly the KGB).