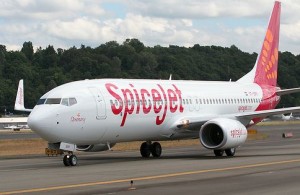 A plane collided with a buffalo when it was about to takeoff from Surat, western India. Passengers did not suffer any damage, reported this Friday sources of the company.

The incident occurred yesterday at 19:25 local time (13:55 GMT) when an aircraft of the Indian low cost airline SpiceJet with 146 passengers on boars picked up speed on the takeoff runway of the airport terminal, said a source from the company to the local agency IANS.

The collision with the animal caused major damage to the aircraft, which had to return to the parking area, in order for the 140 passengers and the 6 crew members could fly in another aircraft with destination to New Delhi.

Meanwhile, Sharma SD, the airport director, said that “passengers have miraculously survived.” “There was no engine failure or any technical failure. We have ordered an investigation, and the results will be announced in a couple of days.”

The airline has suspended all its flights from the Surat airport, after this incident with a Boeing 737-800 of the company, said a spokesperson for SpiceJet.