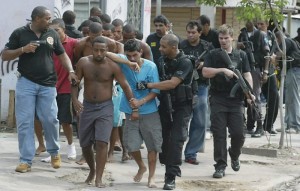 Last Thursday the favela Vila Cruzeiro located in the north of Rio de Janeiro was retaken by a police operative. The criminals of the sector ran away from the officers, who already have the place surrounded and heavily secured.

Vila Cruzeiro is one of the most dangerous places of the city due to the presence of drug dealers groups. The police have formed a contention hedge; so far there has not been any criminal activity. The objective is to prevent any escape attempt on behalf the criminals and nobody can get in either. Police units entered the favela through boats; this surprise forced the retreat of the criminals.

Starting today several stores opened the doors of their businesses however, their sales are slow since many people stay indoors due the insecurity. The crossfire between the police and the drug dealers has left 30 people dead in the city.

Government Calls for Peace Between Both Koreas