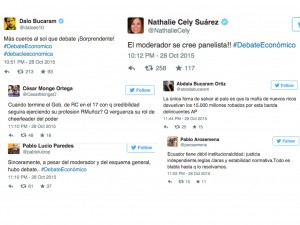 Opposition politicians or those in favor of the government used their Twitter accounts to give their opinion on the panel discussion, which was attended by President Correa on Wednesday, with the hashtag # DebateEconómico (#EconomicDebate).

From Lucio Paredes and Dalo Bucaram to the former minister Nathalie Cely, including businessmen like Pablo Arosemena, they criticized and applauded the interventions. Absentee politicians: Jaime Nebot, Guillermo Lasso and Jorge Glas.