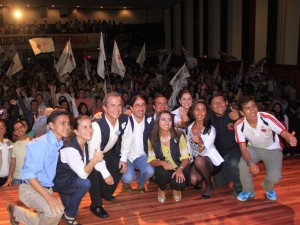 Some education experts believe that the message addressed to young people during the presentation of a student movement has a “political burden” that would seek, they say, to condition the scholarship awards with the support of the regime of Rafael Correa.

Last Friday the launching of the National Front of Scholars, attended by Foreign Minister Ricardo Patino, the Secretary of Higher Education, Science, Technology and Innovation (Senescyt), Rene Ramirez, among other authorities, was held in Guayaquil.

“It is necessary that you collectively drive a national consciousness, in every neighborhood, in every home, in every place,” Patino said.

And he talked about the goal: “So this project remains, strengthens, deepens.”