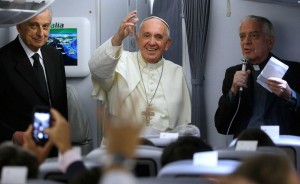 “It’s very important in your work (the press) the hermeneutic of a text. A text can not be interpreted with a phrase … It has to be the whole context” Pope Francis told to reporters on his return to Rome, last Sunday, about his tour through Ecuador, Bolivia and Paraguay.

He also thanked the people of Ecuador for making a “parenthesis” in the demonstrations that were developed to “respect” his visit to the country, from 5 to 8 July. The text of the colloquium was published on the website of the Vatican media.

“Evidently, I know there were political problems and strikes. I know that. I do not know the intricacies of the policy of Ecuador. It would be foolish from me to give an opinion. I was then told that there was a hiatus during my visit that I appreciate … Now if things resume it is clear that the problems of political discussions continue,” said the pontiff.

He also clarified that the phrase pronounced on his arrival to the country: ” It will always count (the government) with the commitment of the Church to serve the people of Ecuador, which has stood with dignity.”

” … I refer to the awareness that the Ecuadorian people have been gaining in value. There was a border war with Peru recently. There are stories of war. After a greater awareness of the variety of ethnic richness of Ecuador. And that provides dignity. Ecuador is not a country of discarding, ie that refers to all the people and all the dignity of the people, that after the border war, has stood up and has become increasingly aware of their dignity … ” .
He said he knew that the phrase was used “to explain both situations: the government has made Ecuador stood up or the opponents of the Government have stood up.”
In an interview with CNN in Spanish, President Rafael Correa said that the Holy Father referred to the Citizen Revolution “by the changes” it has implemented.

About 970 Ecuadorian farmers have certification to sell their products