Pope Francis gave a message to journalists on the plane 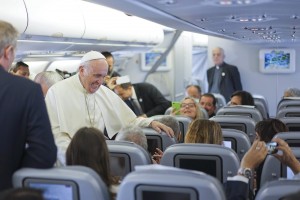 75 Journalists accompany Pope Francis during his pastoral tour in Latin America, in the narrow corridors of the airplane of the Alitalia company that took him to Ecuador. The pope again showed his warm nature to them; the pontiff joked, received dozens of gifts, pictures and objects he blessed and had a phrase for each of the journalists.

“Good morning. Thank you all. I thank you for the work you will do. A job that will be tough and can do much good … Giving news of the things that will happen on this trip. We will see in these eight days,” said the Pontiff.