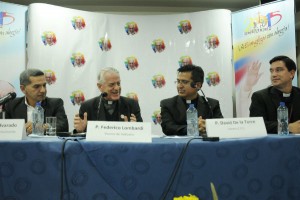 Federico Lombardi, Vatican spokesman, at a press conference said that pope Francis is impressed by people’s participation in Ecuador.

He stressed that during his stay in Ecuador, there were millions and millions of people who attended the Masses and who crowded the streets to see the pontiff.

Proof of this were the times that Francis came to the door of the Nunciature to greet the thousands of people who called him so he might give them a blessing.

Pope Francis fulfilled an arduous agenda in Guayaquil and Quito