Pope Francis will receive the keys of Guayaquil and Quito 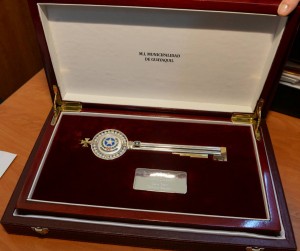 On Monday Pope Francis will receive the keys of the city from the Mayor of Guayaquil on his arrival to the AFB terminal, besides being declared guest of honor.

The key is an alloy of fine 18K gold, 23 silver centimeters in length, which highlights the shield of Guayaquil within a circle of pearls.

Martha Castillo, designer of the key, explains that the pearls are allusive to the city, that is known as the Pearl of the Pacific. In addition, a blue stone and a topaz allude to the sky of Guayaquil.

The Metropolitan Council of Quito and Mayor Mauricio Rodas, declared the Pope illustrious guest and will give him the keys of the City on Tuesday, July 7 at 17:00 in the San Francisco church, as part of his meeting with civil society.