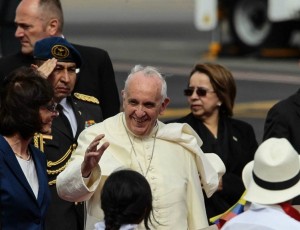 At 14:44 the plane of Pope Francis arrived at the Tabavela Airport, in Quito. His visit to Ecuador marks the beginning of his pastoral tour through Latin America.

He was greeted by a group of children waiting for him dressed in Indian costumes he blessed, as well as by the president of Ecuador, Rafeal Correa, and his wife, along with other government officials and the Ecuadorian Episcopal Conference.

Pope Francis greeted those present, thanked God for allowing him to return to Latin America. “I feel joy and gratitude to see this warm welcome,” he said.

He left the airport in a Fiat vehicle and then moved to the Popemobile to reach the Nunciature, where he will stay until the end of his visit on July 8.

Visit of Pope Francis carries a message of peace and joy

Pope Francis fulfilled an arduous agenda in Guayaquil and Quito