Poroshenko is the new president of Ukraine 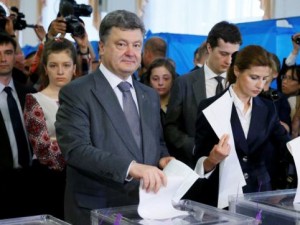 The businessman Petro Poroshenko, 48, is the winner of the presidential elections in Ukraine, beating other candidates after winning the 53.7% of the votes, from a 54.5% of a total counted.

“We can firmly and convincingly say that whole Ukraine has voted and this is the choice of all Ukraine,” he said.

After having passed by a significant margin the barrier of 50%, a runoff election will not be necessary for Ukraine to have a new and legitimate president.

Regarding his work, the new president assured he will defend the interests and safety of the inhabitants of the eastern regions of the country and he will prioritize the security and defense.

He also mentioned that Ukraine has supported the unitary state and its European future. “85% of Ukrainians have supported supported the European path for Ukraine,” he said and noted that the work of his administration will be governed by the pro-European idea.