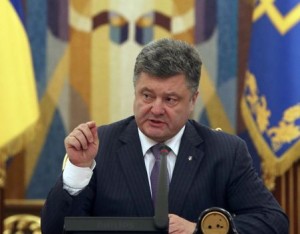 Ukrainian President Petro Poroshenko yesterday warned the separatists of the east of country and Russia that Ukraine is ready to defend itself militarily if peace plan fails.

The warning comes after the signing in early Saturday in Minsk (Belarus) of a nine-point memorandum which envisages the creation of a demilitarized zone of 30 kilometers wide on both sides of the front line.

The announcement of Poroshenko comes shortly after two Ukrainian soldiers were killed in a new episode of combats.

Recognizing there has been an “de-escalation” in the rebel regions, the president said, however, that Ukraine “has to be prepared to defend our state if the peace plan does not work.”

“We need to strengthen our lines of defense, our military,” said Poroshenko, who plans to acquire equipment and radar surveillance after receiving last week the American promise of $ 46 million aid to buy equipment and train the army.