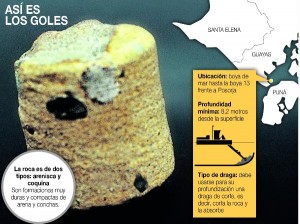 The Port Authority of Guayaquil (APG ) is opposed to charge a levy before the dredging works of Los Goles rock start. In response, the Municipality of Guayaquil has to remove that obstacle in the process.

Despite questioning the legality of the process initiated by Mayor Jaime Nebot, according to Juan Carlos Jairala , APG Manager, the dredging of Los Goles rocobstacle at 11 meters on low tide keeps ongoing.

The idea of Nebot is to deepen the access area to the channel, in front of Posorja, so boats up to 13 meters deep can arrive at high tide, something that would generate even more competitiveness to the port of Guayaquil.

But the desire of the Government is to move this city operations elsewhere. The Municipality  opposes and think the access channel can be drilled down to 11 meters, which has 94 miles long.

The Strategic Mobility Plan states that the dredge is very expensive. But the productive force of the mayor, do not think like this. Even the same Guayaquil Chamber of Shipping has said that the deepest the channel it could bring more largerly burden to compensate the municipal tax.

This payment and the dredging, does not meet the Constitution according to Jairala because “it means implying the Municipality in the competition of that area, affecting the exclusive jurisdiction exercise the Government has in this strategic area.”