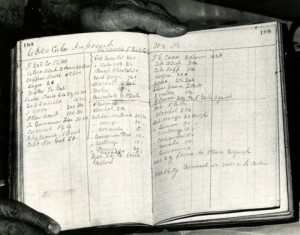 According to the website www.thisamericanlife.org the mysterious Coca-Cola´s recipe was discovered in a photograph of an article published in the newspaper “Atlanta Journal Constitution” in 1979.

The image shows a list of ingredients hand written in 1886 by a friend of the drink´s creator, John Pemberton, in a druggist’s book that has passed from generation to generation and is now in the hands of a woman in Griffin (Georgia), according to the website.

According to the handwritten paper in the photo Coca-Cola contains the following ingredients: 8 ounces of alcohol, 20 drops of orange oil, 30 drops lemon oil, 10 oil of nutmeg, 5 coriander oil, 10 neroli oil -bitter orange flowers-, 10 cinnamon oil, three ounces of citric acid, two ounces of water, one of caffeine, one of vanilla, two pints of lime juice, ½ ounce of caramel for coloring and a quantity of sugar that is unreadable on the list. In addition the 7X secret ingredient in soda that only represents 1% of the recipe but it is crucial to its characteristic flavor.

This original recipe also included three glasses of fluid extract of coca, but this is an ingredient that the company withdrew from the compound in the early twentieth century after a torrent of criticism.

To try to check the recipe, the web site team met a group of experts and lovers of the drink in a taste of the mixture which was obtained with the recipe described above.

According to the website, most of those who tested did not found differences with the Coca-Cola that is marketed today.

Coca Cola, which maintains the official version of the recipe in a vault in Atlanta under key and is only known by two employees, has not confirmed at this stage whether the composition published is correct.

Mubarak is Safely with Family