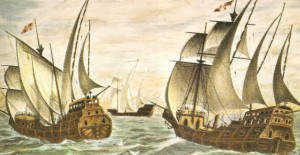 According to a team of marine archaeologists, the boat sunk on the north coast of Haiti, could correspond to the “Santa Maria,” ship which sailed from Spain 500 years ago in search of a shorter route to the Indies. In 2003 these remains were discovered near the camp of Columbus, which does not rule out the idea that it could be the aforementioned vessel.

Barry Clifford, Massachusetts marine researcher said: “All the geographical evidence, archaeological and underwater topography strongly suggests that the sag is the famous main ship of Columbus, the Santa Maria.”