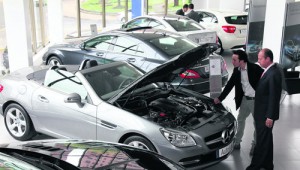 The Finance Minister Fausto Herrera notified a possible increase of ICE for luxury vehicles, during the presentation of the Budget assignments for 2015.

According to the Internal Revenue Service (SRI by its Spanish acronym), at present, this tax is applied to vehicles with a retail price for the public of over USD 20 000 and represents 26.21% of the total ICE collected by the tax entity between domestic consumption and imports.

The taxable income of this ICE is between 5% and 35%, being the vehicles with a price of between USD 20,000 and USD 30,000 those with a higher percentage of revenue in the country (except orthopedic vehicles for the transfer or use of people with disabilities that do not pay ICE).

According to the SRI, until September 2014, this item grossed $ 154 million, representing an increase of 35% compared to the same period in 2013 and exceeds the total revenue of the past year, which was $ 83 million.

The vehicles revenue is the third highest in terms of tax collection after cigarettes and beer within the country.