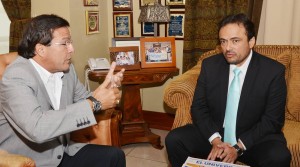 The Prefect of Guayas, Jimmy Jairala, met yesterday with the Prefect of Azuay, Paul Carrasco, and pledged to try to solve the border conflicts they face, until December.

Jairala said that in case of not reaching a “happy ending,” the other law procedures to establish limits will be applied.

The standard proposes ‘friendly’ formulas for the resolution of disputes and also a referendum.

Jairala and Carrasco said that it would be the last option.

Both signed a letter of intent with seven “commitments.” These are: The start of direct negotiations, and the formation of technical committees and a commonwealth.

Jairala added that this would be to prevent incidents like last Thursday´s in Abdón Calderón, where a group of Azuay wanted to deny the entering of Guayas Prefecture machinery.