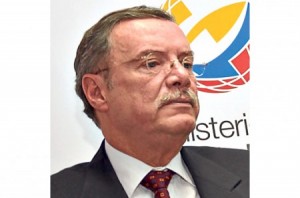 Roberto Betancourt, Ambassador and Chief Negotiator of the multiparty trade agreement between Ecuador and the European Union (EU), said that the country is awaiting for a pronouncement of the Council of Ministers and the European Parliament on the replacement regulation to the General System of Tariff Preferences (GSP Plus), whose term will end on December 31 this year.

Betancourt said that the negotiated with the European Union is an alternate instrument, in order to avoid that Ecuadorian products pay tariffs from January, 1 of 2015 until the approved trade agreement is signed on July 17.

The Chief Negotiator explained that the document had the approval of the Comissioners Association of the EU and passed to the Council of Ministers and to the Parliament so they simultaneously discuss this initiative.

“The Cabinet has already met on October 10 and all considered that it should continue its course, they agreed that Ecuador receives a treatment as the one it was receiving, but there was no voting,” he said.

He added that for November the texts on the trade agreement would be ready to be put in consideration of the parties.

Venezuelan government presents evidence of a plan to destabilize the country