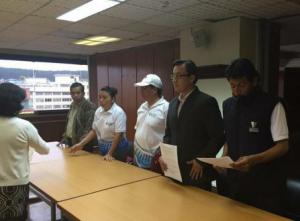 The State Attorney General´s Office initiated the preliminary investigation against David Rosero, a member of the Council of Citizen Participation and Social Control and four teachers of Ibarra, who are accused of the crime of attack and resistance against the National Police.

The alternate prosecutor Cecilia Armas reported during the indictment hearing that last Monday the policemen who tried to raid the offices of the Severance Fund of Ibarra were attacked by the detainees.

David Rosero denied the assault and said that he and the other teachers were victims of police violence. As evidence he showed to the national judge Vicente Robalino a few bruises on his left arm. The preliminary investigation will last 30 days and the five detainees will appear before a judge every two weeks.

Raid in the Severance Fund´s seat