Presidency Mandate Revocation Has No Effect 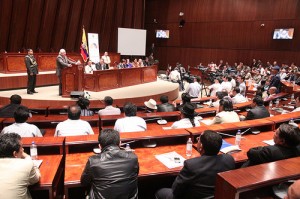 This Thursday, it was confirmed that the Constitutional Court decided to suspend the mandate revocation process all over the country, eight of nine of the members voted in favor of the resolution. Consequently, there is no effect on the processing of office presidency revocation started since January 5, 2011 by the National Electoral Council.

The mandate revocation allowed any Ecuadorian to call votation to remove elected officials from their positions, such as political activist Carlos Vera, who has been collecting signatures to get President Rafael Correa to leave mandate, since August 2009. The minimum number of signatures collected must be equal to 10% of those enrolled in the registry.

Alexis Mera, legal secretary of the presidency, explained that “if the authority who is wanted to be revoked does not oppose to the procedure… it can continue.” According to Mera, President Correa will not object.