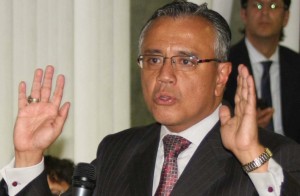 Legal Secretary of the Presidency Alexis Mera said that this dependence has not submitted nor will present a complaint against the court that resolved the case of Mery Zamora, charged by terrorism and sabotage.

This was clearified during his presence at the National Judicial Council, yesterday. “We must respect the independence of the judiciary. It would sound like vengeance and President Correa is not a man of revenge.”

But he added that the Minister of Justice (Ledy Zuniga) will analyze the sentence because “she has the right to do it.”

He concluded by mentioning that they are awaiting the written judgment “to analyze it”.