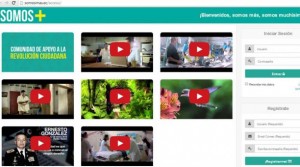 President Rafael Correa announced during his weekly address on Saturday, January 24 that the webpage Somos + (http://www.somosmas.ec/), has been created to address what he called “a systematic campaign of discredit” in the social networks.

In the website, people who register will receive contents of users participating in the ‘smear campaign’ to be the same Internet users those responding and “we are also going to identify these people to see if they are so humorous when everyone knows who he/she is,” Correa said. “If they send a tweet, we will send 10,000,” he concluded.

He also said that during the next weekly address the identity of Internet users who post messages against him and that are offensive will be revealed. In that sense, he exhibited several examples, such as a post that said “a shot in the head would not be that bad for you,” which he described illegal because it is a threat.