President Correa ratified the testimony of González about the 30-S 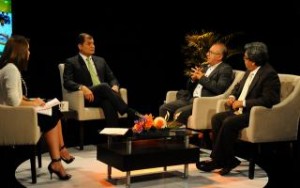 President Rafael Correa, when asked about what was spoken by General Ernesto González, in his book Testimony of a commander, said that it does not say anything new about the events of last September 30, 2010 (30-S).

According to Correa, the then Chief of the Joint Command of the Armed Forces confirmed what happened that day and that is why he noted as positive his statements.

The government is interested in clarifying three political events surrounding the events of 30-S, when a police uprising took place: whether there was a kidnapping, a ransom demand and a coup.