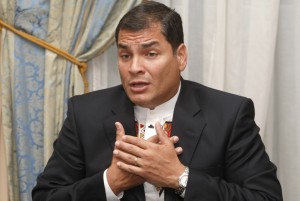 President Rafael Correa does not exclude the possibility of asking the people on various issues if the opposition achieves to convene a popular consultation on amendments to the Constitution.

“They First gather the signatures to see if anyone pays any attention to the consultation of (Guillermo) Lasso. It is not that we fear to a consultation but we know what they want, to call attention … One of these processes cost between $20 and $ 30 million so probably we will take advantage to ask other things, for example, if you agree with the profits of the bankers,” Correa said.

The President emphasized that the specific amendment on indefinite reelection for popular elected authorities expands the rights of voters and it does not decreases them. He pointed to the promoters of a referendum on amendments of wanting to restrict the right of citizens to vote for continuity. He said again that his intention is not be a candidate in 2017, but did not rule out whether thisgovernmental process is threatened.

Catalonia will hold symbolic sovereignty consultation despite suspension of Court