President of the AFA Julio Humberto Grondona passes away 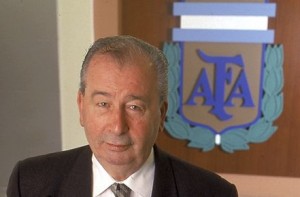 Julio Humberto Grondona, President of the Argentine Football Association (AFA) for the last 35 years, passed away this Wednesday July 30 at a private clinic while waiting to undergo surgery by a heart condition.

Grondona died at age 82 at 12:50 (Argentina time), according to reports, he was admitted in the morning in the Mitre Sanatorium where he had to undergo surgery by a neurosis in the aorta.

As sources of AFA had reported at first, Grondona had a decompensation on early Wednesday and was taken to the Mitre Sanatorium, where he was confined.

Consulted spokesmen indicated that Grondona developed severe chest pain but did not have an episode of cardiorespiratory arrest, so he was taken to the medical center, accompanied by his son Julio Ricardo where his death was known.