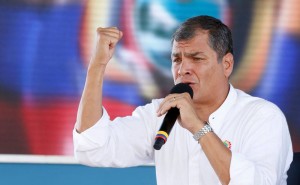 If the opposition prevents the “governance in the country” of an eventual government headed by another ‘bloc’ of Alianza PAIS (AP), President Rafael Correa would present for elections again.

“And if the opposition wants to return to the old country of ungovernability, of blackmail, of subjugation, there will be a crossed death or we will wait for 2021, and we’ll see again in the polls, the fear that (Rafael) Correa returns, will make them behave some good, some decent,” he said yesterday at the weekly address broadcast from Zambiza, in the capital.

Correa referred in those terms to the proposal submitted in the bureau of AP to include in the draft constitutional amendments that neither the Assembly members who are approving these changes, and have served two terms, neither the president who has also served two periods, can run in the next election.