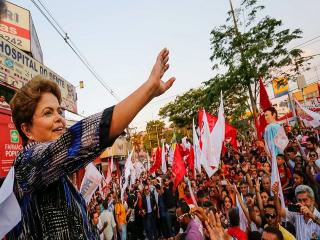 The latest survey published in Brazil has shaken again the campaign and the country by revealing something that seemed impossible a month ago: President Dilma Rousseff, is again as the likely winner of the next election, on October 5, with appreciable distance . Despite in late August the candidate Marina Silva, of the Brazilian Socialist Party (PSB), rose 15 points and stood as the favorite in the electoral race to govern Brazil.

A survey published on September 28 by the newspaper Folha de S. Paulo, shows that the President has taken off her opponent and that exceeds in 13 points, which translates into about 15 million votes. In one week, Rousseff has managed to overcome Silva by six percentage points, which shows the current downward trajectory of Silva and the now ascending of the current President.